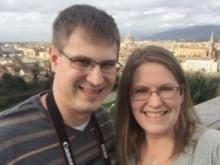 A shrug of the shoulders is all it took to turn our world upside down.

My husband and I sat in our RE’s office, in those plush leather chairs that are supposed to make you feel comfortable, waiting for hope. After four failed IUIs, our IVF egg retrieval had given us nothing to transfer. Nothing grew after the initial fertilization. We were devastated and needed answers. I was 29 years, he was 31. We were young and healthy. This shouldn’t be happening.

Our doctor looked at us from across his desk. And shrugged his shoulders.

He had no clue why our treatments hadn’t worked. Said he would recommend trying again if money wasn’t an issue. It was probably a fluke, especially at my age. But he knew money was an issue, so his next best move was to use donor eggs.

My mind reeled, of course. Donor eggs? That means any babies we had wouldn’t be genetically mine. Could I handle that? Would I resent my husband for the genetic link he would get to have? Would I think of myself as not being their real mom? We needed time to think.

We considered a few options. Maybe we could try IVF again. It wouldn’t quite ruin us financially, and it might work. Maybe we could be childless; we could travel the world, live the good life. But I nearly died inside just thinking about it. Embryo adoption presented itself as a very viable option, but the more my husband thought about it, the more he wanted to just give it one shot with genetic material from at least one of us – if that didn’t work, we’d move on to embryos.

An egg donor really was our best option. So we researched until we couldn’t research anymore. We met with financial people at our clinic. We had phone consults with three other clinics. Every discussion pointed to the same glaring fact: if we couldn’t afford to do IVF again with my eggs, we sure as hell couldn’t afford a donor egg cycle, not at nearly twice as much as a regular IVF cycle. We felt so defeated.

But then, I remembered something I’d seen briefly mentioned on the support forum I’m on (thencomesfamily.com). A woman had traveled to the Czech Republic for a donor egg IVF cycle. I remember mentioning it to my husband once, toward the beginning of our treatment, and both of us laughing off the idea. But just maybe…

On a whim, I contacted a few clinics in the Czech Republic to get some information – cost, protocol, stats, anything they could give me. And the responses came in. The stats were on par with, and sometimes better than, stats of clinics here in the US. Protocol was similar and monitoring could be done stateside. And the cost? Well that was the kicker. The price tag for a cycle was a fifth what it was here! This was a very real option. And after a lot of soul searching, comparing of clinics, talking with my therapist, and crunching the numbers, we decided to go for it.

In January of 2016, we flew from our home in Austin all the way to Rome, Italy to begin our once-in-a-lifetime trip. When in Rome, right? We made the trip about more than conceiving a child. We spent time in Florence, Vienna, and Prague. We made memories that will last us a lifetime.

And on February 4, 2016, we also made the embryos that would become our babies. On February 9, we transferred two perfect little blastocysts, and those little blasts became our two little girls, due in October.

Even though we’re now finally expecting our little miracles, my husband and I remember all too well the pain and desperation we felt pretty much constantly last year. All we want to do now is shout it from the mountaintops that this option exists, it’s easier than it seems, and isn’t crazy at all!

We’re grateful every single day that this option exists. We’re grateful to a clinic that confidently took us in and did what no one else had been able to do. We’re grateful for that shrug of the shoulders from our RE that sent us on such a wild ride. And while there are times that we still mourn the loss of a child with my eyes or nose, we know that these babies are ours, and we already love them more fiercely than either of us ever could have imagined.