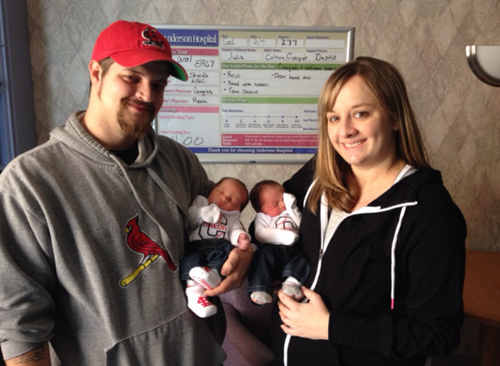 Parents never expect to bury their child. But that is just what happened to Julia and Dustin who met in high school, graduated, got married and then began their journey to become parents.

After a year of trying, Julia  began worrying that something might be wrong. Yet she and Dustin would have a family.  After three more years of negative pregnancy tests the couple felt devastated. Then, in late 2010 Julia had some cramping and a late period so she made a doctor’s appointment. To her complete surprise, the nurse showed Julia a positive pregnancy test; the news they waited to hear for four years.

The first 17 weeks of Julia’s pregnancy were great, no morning sickness, nothing except watching her belly grow and planning a baby shower. Dustin and Julia explored baby names. Then during her 18th week she started cramping. After many calls to her doctor, the pain grew worse and Dustin and Julia found themselves in the emergency room.
The news wasn’t good. Julia’s ovary was twisted and she would need immediate surgery.  The doctor explained there was a good chance the ovary was dead, making her body toxic to herself and the baby; threatening both of their lives.  There was a chance neither would make it out of surgery.

As Julia lay on that cold operating table, tears streaming down her face, all she could think about was how helpless she felt. She just couldn’t understand how this could be happening.

After being rushed into surgery both (soon to become) Parker and Julia came through fine. As an added bonus, the doctor was also able to save Julia’s ovary. Julia and Dustin left the hospital thinking surely the worst was over. They headed out to have an ultrasound – this was the day they were to learn they were having a boy.

Julia, Dustin the grandparents-to-be and Julia’s little brother all crowded into the ultrasound room to find out the news. Excited beyond all expectations they found they were having a boy. Due to her surgery Julia was scheduled for a follow-up ultrasound the next week. They were told there was “too much air” inside Julia. Julia and Dustin went home and continued to celebrate their little boy.

A week passed until Julia went back for the second scan. Their joy was cut short when the doctor came in and told them that things didn’t look right on the ultrasound.
The doctor thought their was a chance that Parker had a” Diaphragmatic hernia“.(CDH) Julia was referred for level II  ultrasound. [Note: A level II ultrasound is a high resolution anatomy scan of the baby to look at development and for any fetal anomolies. Diaphragmatic Hernias are very serious and many infants do not survive. More information]

Dustin and Julia left the office hearing only the word”hernia” and thinking, people get those all the time. They thought little Parker would have to spend some time in the hospital after birth but that this was something they could overcome.  Julia started researching. She in a state of shock and disbelief when she learned the serious nature of CDH.
Only 50% of babies would make it and the hospital stays are lengthy if a baby survives. The  more Julia read the worse she felt. Dustin tried to console Julia thinking they could overcome any of the obstacles in their path.

Finally they went for the level II ultrasound but the news again was not good. The doctor came into the room to give them the results of the ultrasound. The
news was the worst thing any parent should ever have to hear. The doctor told them their baby has very severe congenital diaphragmatic hernia. Parker only had a 30% chance of living.Again, this couple was devastated. Julia’s thoughts raced, ” How could this be happening to us? Why my baby? What did I do to make this happen?” The questions were flooding through her mind.

Julia and Dustin’s were referred to St. Louis Fetal Care Institute – a place that would forever change their lives. They went from planning a baby’s arrival to planning doctor’s appointments an ultimately an experimental surgery. The institute welcomed them warmly and told them they would fight for their baby and do everything and anything in their power they could to save Parker and to give him the best chance at life..

Because Parker’s case was so severe, they discussed doing an experimental procedure called tracheal occlusion. The doctors would go in and put hydrogel in the baby’s lungs in order to help the lungs expand. The hope was that at birth Parker would have more lung tissue. The medical board of the institute discussed it and approved this for the family. The count-down to surgery commenced.

One week before the scheduled surgery on Parker, Julia found herself back in the hospital for an emergency appendectomy. Most people reading this must be thinking – “What else can happen to this couple?”
But once again the baby and Julia came through the surgery.

Julia continued her weekly visits to the Fetal Care Institute. They truly became a part of their family. To this day she keeps in touch. It was so hard for them to stay positive. But she did stay positive and mustered an immense amount of courage as both Julia and Dustin enjoyed the pregnancy kicks, jabs heartburn and backaches – The closer the day came the more nervous Julia became.

Finally the day for the experimental procedure arrived. Julia was doing the only thing she could for Parker – she knew that as long as he stayed inside he was safe. They were met at the hospital by Parker’s aunts, uncles, and grandparents. Every second that passed, Julia became more anxious. Finally, the operating room was ready. Again Julia found herself on that cold operating table with tears running down her cheeks. This moment was the culmination of all their planning.

The surgery was over in just an hour.   Parker was born at 9:01 AM. With her eyes barely open, all Julia wanted to know was how Parker was doing. One of the nurses was there with a cell phone picture Parker so that as soon as Julia was concious she could see him. .

He was perfect, so much more precious that she could have ever imagined. But Julia wanted to see him and begged to be taken to the NICU. The doctors were working to stablize Parker and Julia was told he seemed to be doing pretty well.  Finally Julia was wheeled up to the NICU. A crowd of people were standing outside Parker’s room.
“As they pushed me in the room and I see my baby, I had never been so happy in my life. For that moment my life was complete, I felt like I had finally done something right in my life.” 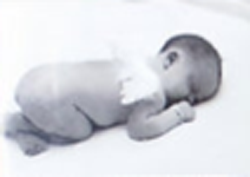 Within minutes of seeing Parker for the first time,  the doctor came in with a very stern look on his face. The news would change their lives forever. Parker’s doctor told Dustin and Julia that Parker would not survive. Parker took his last breath in his daddy’s arms at 2:15 pm the same day he came into the world. There can’t be anything worse for parents than losing a child. They were devastated but didn’t give up their dream of family.

Julia and Dustin applied to the IVF Scholarship program. In their letter explaining the circumstances of Parker’s passing they said, ” I never believed this would be the ending to our story.” They were grieving from the loss and almost without hope. But their ending (or beginning) wasn’t far off. Though Parker will always be with them, they received a second chance to grow their family through INCIID’s Scholarship Program. 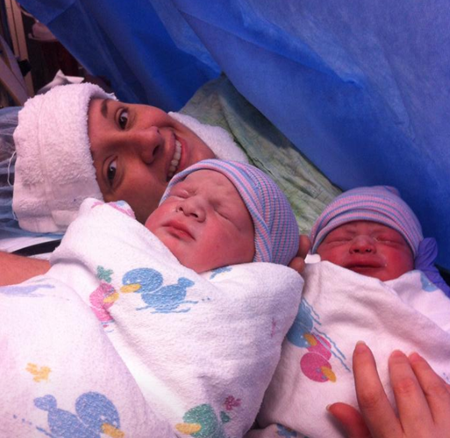 After being selected and them matched with a clinic in late 2014 Julia and Dustin delivered a healthy set of twins (Colton and Cooper) in 2015. We are pleased to present their family to you. We hope their story will give others hope and courage. It is couples like Dustin and Julia that gives hope and courage to us.  It is why INCIID created the scholarship program. If you think the work INCIID does for couples is important, please consider a tax deductible donation. Your contributions keep the scholarship program alive and well.